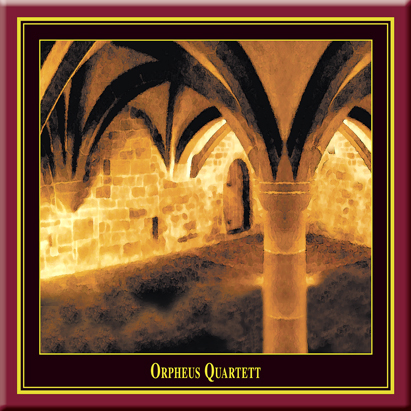 ince their debut at the Wigmore Hall, London, in 1994 the Dusseldorf-based Orpheus Quartet has been a regular guest to this wonderful chamber music hall, renowned for its uncompromizing standards of performance. The Quartet's concert of 28 May 2000 inspired The Strad magazine to another admiring retrospective, rounding off in the same breath: "One had to marvel at the Orpheus Quartet's sense of timbre, at its unified view of the music and its ability to create both textural variety and impetus."
The Orpheus Quartet spends a lot of time commissioning and playing contemporary music and looks very seriously at all possibilities to broaden the standard repertoire with interesting and forgotten compositions. This has given them an exceptionally wide scope. Not surprisingly. their recordings have been greeted with international acclaim. In January 1993 the Quartet was awarded the Grand Prix du Disque de l'Academie Charles Gros for their interpretation of Malipiero's eight String Quartets, a world premiere recording. The disc of Schubert's Quintet in C major with Pieter Wispelwey, cello, was awarded a Diapason d'Or (1994).
The Orpheus Quartet, a truly international ensemble (French - Dutch - Rumanian), was founded in 1987 by Charles-André Linale (violin), Emilian Piedicuta (violin), Emile Cantor (viola) and Laurentiu Sbarcea (violoncello). Wherever they concertize, audiences and press alike are impressed by the intensity and musical expression of their interpretations. Furthermore, they won in fact every competition they participated in: the Valentino Bucchi International Chamber Music Competition in Rome (1988). the Karl Klingler Competition in Munich (1990) and the first International Chamber Music Competition of Japan, held in Osaka (1993). The result of this were many invitations from all over Europe, The United States and Japan.
After their much praised US debut in 1999, successive tours in april 2000 and november 2001 have been accomplished to great public acclaim. In october 2002 an US tour took place. In the 2000-2001 season the Orpheus Quartet has performed as much as six times in London, four alone in Wigmorehall where they a.o. gave a very successful Schubert-weekend. They made 2 tours with different pianists, one with Homero Francesch (Italy and Germany) and two with their long time friend Menahem Pressler. (Germany, Netherlands, UK, USA and Canada). The Orpheus Quartet gave the opening and closure concertin the Ticino Musica festival (Ascona-Locarno) in summer 2001 and were immediately reinvited for the summer 2002.
Ever since their foundation the Orpheus Quartet has given much of their time to teach and apart from their regular classes in Mainz, Essen, Wuppertal, Aachen and Utrecht, the members of the quartet always give master classes during the Summer in countries such as Spain, Belgium, The Netherlands, Denmark, Sweden and Switzerland.
Further informations about each member of the ensemble and current concert-dates can be found at the homepage of the Orpheus Quartet.

A terrific performance and the equally rare chance to hear one of Europe's most thoughtful Ensembles.
Sándor Veress has been overshadowed by his Hungarian compatriots, but on the rare occasions when I encounter his music I always find it worth hearing. His First Quartet, premiered in Prague in 1935 but written four years earlier, is demonstrably from the same soil as Bartók and Kodály, but quite individual. Its first movement is in slow-fast-slow form, after which comes an Andante and finally a highly rhythmic Vivo. The German based Orpheus Quartet gives a terrific performance to end this concert, recorded live in the convent at Maulbronn... The disc is worth pursuing for the rare Veress and the equally rare chance to hear one of Europe´s most thoughtful ensembles. Since the disc was made, the Orpheus has changed its second violinist and we have had the appalling news of the death of leader Charles-André Linale.

***** A real feeling of being in the concert

I first heard the Orpheus Quartet in Spain and have collected their studio recordings. I was eager to hear them again, and K&K's series of live concert recordings from Maulbronn has given me an opportunity to hear how they were playing two years on. However, whilst writing this review, I am saddened to learn from the Orpheus Quartet website that their leader, Charles-André Linale, was killed in a car crash last month. Chamber music is given in the lay refectory, and reverberation is long during pauses after Beethoven's sf chords, but you soon get used to that, and it is more than compensated for by the bloom on the sound - you have a real feeling of being there with the audience. The Orpheus four have exactly the right feeling for the not-easy Schubert Quartettsatz and Beethoven's Op. 59/2, which can be a long haul; with all repeats, it was gripping from beginning to end. In this June 2002 concert their novelty was a quartet by Sandor Veress, an excellent composer heard infrequently in UK. Without any studio editing, the accuracy of these performances is remarkable and testifies to the good health of this top string quartet in what, it transpires, will have been one of their last recorded concerts with their multinational founder members; the exceptional performance of the Beethoven a worthy memorial for Charles-André Linale.