Hosanna in excelsis · Music & Poetry in the Middle Ages 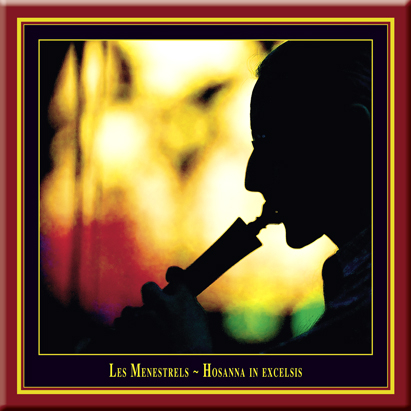 Music and Poetry from the spiritual world of the Middle Ages,
performed by the Ensemble for Early Music 'Les Menestrels'

lay and pleasure are necessary to the sustenance of human life. However, all services useful to human sustenance must be regarded as permissible. Therefore, the services of menestrels, which are intended to provide cheer, are not a forbidden thing, provided that they are not in a state of sin, and they exercise moderation in their playing - namely that they use no hateful words and do not begin playing during work or at forbidden times. And those who support the menestrels are not committing sin! Rather, they deal justly when they give them for their services that which is their due.

exts and music from the spiritual world of the European Middle Ages form the subject matter of this programme, which the Les Menestrels Ensemble has put together specially for this performance held in the monastery church at Maulbronn. One is astonished by the abundant variety of language and subject matter on offer here. Yet perhaps even more astonishing is the widespread, cross-border dissemination of a body of religious and cultural thought that flourished outside church walls. In today’s monotonous popular culture, shaped as it is by the dogma that what sells is what matters, cultural and human values no longer enjoy pride of place. Linguistic standardisation is pursued aggressively, and dialects, expressions and cultural resonances travel beyond regional borders in only the rarest of cases. In the song as cultivated in the Middle Ages, however, we find a linguistically multifaceted culture; one that is, in this sense, truly more European. Modern media have wrought little improvement. On the contrary, inquisitorial surveillance has found its match in the uniformity-enforcing filter of a profit-oriented business management "culture." The Church may well have imposed strict guidelines, as Klaus Walter describes in the notes below, but at least the themes that were the focus of artistic creation were those by which human beings are moved, and wit and subtlety challenged the human intellect.

he Les Menestrels Ensemble was founded in 1963 by Klaus and Michel Walter. Their original involvement with the music of the 20th century eventually led to an interest in the structural polyphony of 14th and 15th-century music, as exemplified by the Ars Nova in particular. The works of this period continue to be the group’s main focus, although their repertoire has expanded to include works written up to about 1600. Their historical instrumentarium has gradually grown to enable as faithful a reproduction as possible of each period’s characteristic sound. Les Menestrels achieved their first major success at the 1965 Wiener Festwochen (Vienna International Festival) with their staged performance of the cantefable "Aucassin und Niclolete," for which H.C. Artmann contributed the translation. To programmes consisting entirely of concert music they subsequently added programmes with a literary thread, or those that included staged performances. The group has not entirely forgotten its origins in the contemporary music field, however. One of their programmes features a comparison of parallel aspects of old and new music. Depending on the programme, four to ten singers and instrumentalists participate in the ensemble’s concerts. They have access to some 70 historical instruments authentic to the period between 1200 and 1600.
Concerts and radio and television recording sessions have taken the ensemble to nearly every European country and to the USA, Canada and Japan. The ensemble has made recordings on the Westminster, Amadeo, Belvedere and Mirror Music labels. Les Menestrels have performed at festivals including the Vienna International Festival (Wiener Festwochen), the Salzburg Festival, the Festivales d‘España, the Festival Estival de Paris, the International Organ Week in Nuremberg, the Passau European Festival (Europäische Wochen Passau), the Lucerne International Music Festival, the Dubrovnik Festival, the Schwetzinger Festival, Music in Old Krakow, Festivals in Osijek, Flanders, Istanbul, Ljubljana, and Ochrid, the Maulbronn "Monastery Concerts," and many others.