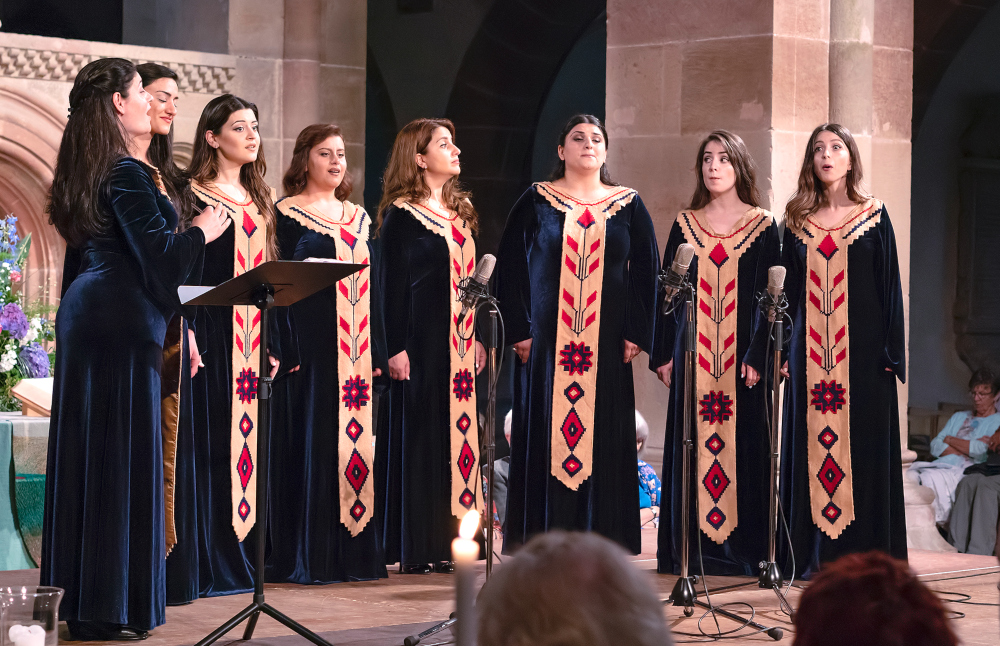 The "Geghard" Ensemble was founded in 2001 by soloist and conductor Anahit Papayan. This female ensemble consists of eight singers. The artistic director is Mher Navoyan, Doctor of Science (Arts), medievalist-musicologist, professor of Yerevan State Conservatory after Komitas. Besides the Divine Liturgies sung each Sunday in St. Geghard Monastery (IV-XIII c.), the ensemble has also wide concert activities. The main aim of the ensemble is to present Armenian sacred and folk choral music in Armenia and abroad. The concerts are often accompanied by the lectures on Armenian music by the artistic director Mher Navoyan. The program of "Geghard" vocal ensemble includes Armenian medieval monodies from the 5th to the 15th centuries in solo and choral performances, choral arrangements of Armenian sacred and folk songs by Armenian classical and contemporary composers, works of Armenian contemporary composers and works of European classical and contemporary composers. The ensemble has had numerous concerts in Germany (2002, 2003, 2007, 2011, 2012, 2015,2016, 2017 & 2018), Austria (2003, 2007, 2008, 2009 & 2016), Finland (2005), France (2008, 2011), Czech Republic (2008), Belarus (2010), Poland (2010 & 2015), Italy (2010), Belgium (2012), Lebanon (2013), Russia (2014 & 2016). Among the festivals in which the Geghard Ensemble has participated especially are remarkable the "Salzburg Festival" in Vienna (Austria), "Caucasus" at the Elbphilharmonie in Hamburg (Germany), the "Moscow Easter Festival" (Russia), the "Kirkko Soikoon" in Finland, the sacred music festival "Voix et Route Romane" in Strasbourg (France), "Musicfest of International Bachakademie" Stuttgart (Germany), "Benefit" concert series of St. Nicholas Church, Prague (Czech Repablic), Internatioanl festival "Des Voûtes célestes of Vendee" (France), "Musica Sacra International" in Marktoberdorf (Germany), "Al Bustan", Beirut (Lebanon), "International Academy of Sacred Music" in St. Petersburg (Russia). In 2010 the Ensemble has participated in two competitions of sacred music and has won the "Grand Prix" in the competition of Orthodox church music "Kolozhski Blagovest" in Grodno (Belarus) and the first prize in the international competition "Hajnowka's Days of Orthodox Music", Hajnowka, (Poland).
According to the tradition St. Geghard Monastery in Armenia, one of the ancient spiritual centers of Armenia, was founded at the beginning of the IV century by St. Gregory the Illuminator, the first catholicos of the Armenian apostolic church. The monastery flourished and prospered in the XII-XIII centuries, especially under the patronage of the noble families Zakarian and Proshian. Ot is famous for the rock hewn churches built at that period. The reason for the naming the monastery "Geghard" comes from the fact that the holy lance (Arm. Geghard), one of the reliques of the Armenian Church, has been preserved there for long time. It was the lance with which the Roman soldier pierced the Crucified Christ. It was Apostle St. Thaddeus, who brought the holy lance to Armenia in the I century. Now it is preserved in the museum of the Mother See of Holy Etchmiadzin. As early as in the middle ages St. Geghard Monastery was famous for its musical traditions. In the VIII century Grigor Ayrivanetsi, a great musician, was mentioned in the history of the Monastery. In XIII century Mekhitar Ayrivanetsi, a medieval famous author and great musician, lived there. Even during the Soviet era the monastery had choirs. In 2002 was established a partnership between the two UNESCO world cultural Heritage sites St. Geghard Monastery and historical Lorsch Abbey in Germany. Since the year 2000 the St. Geghard Monastery is listed as a UNESCO World Heritage Site.
Prof. Mher Navoyan ~ Artistic Director, Musicologist, Honored Worker of Art of RA, Doctor of Science (Arts), Professor, Pro-Rector for Research Affairs of the Komitas State Conservatory in Yerevan, Head of Folk music Department of the Institute of Arts of the National Academy of Sciences of RA. Navoyan is author of articles and monographs in the fields of theory and history of Armenian music. In 1993 Mr. Navoyan graduated from the Komitas State Conservatory in Yerevan as an orchestral performer and in 1994 as a musicologist. Since 1995 he is a professor in Yerevan State Conservatory, the lecturer of "History of Armenian Music", "The Basis of East Classical Music", "Armenian Sacred Music", "History of World Music" etc.