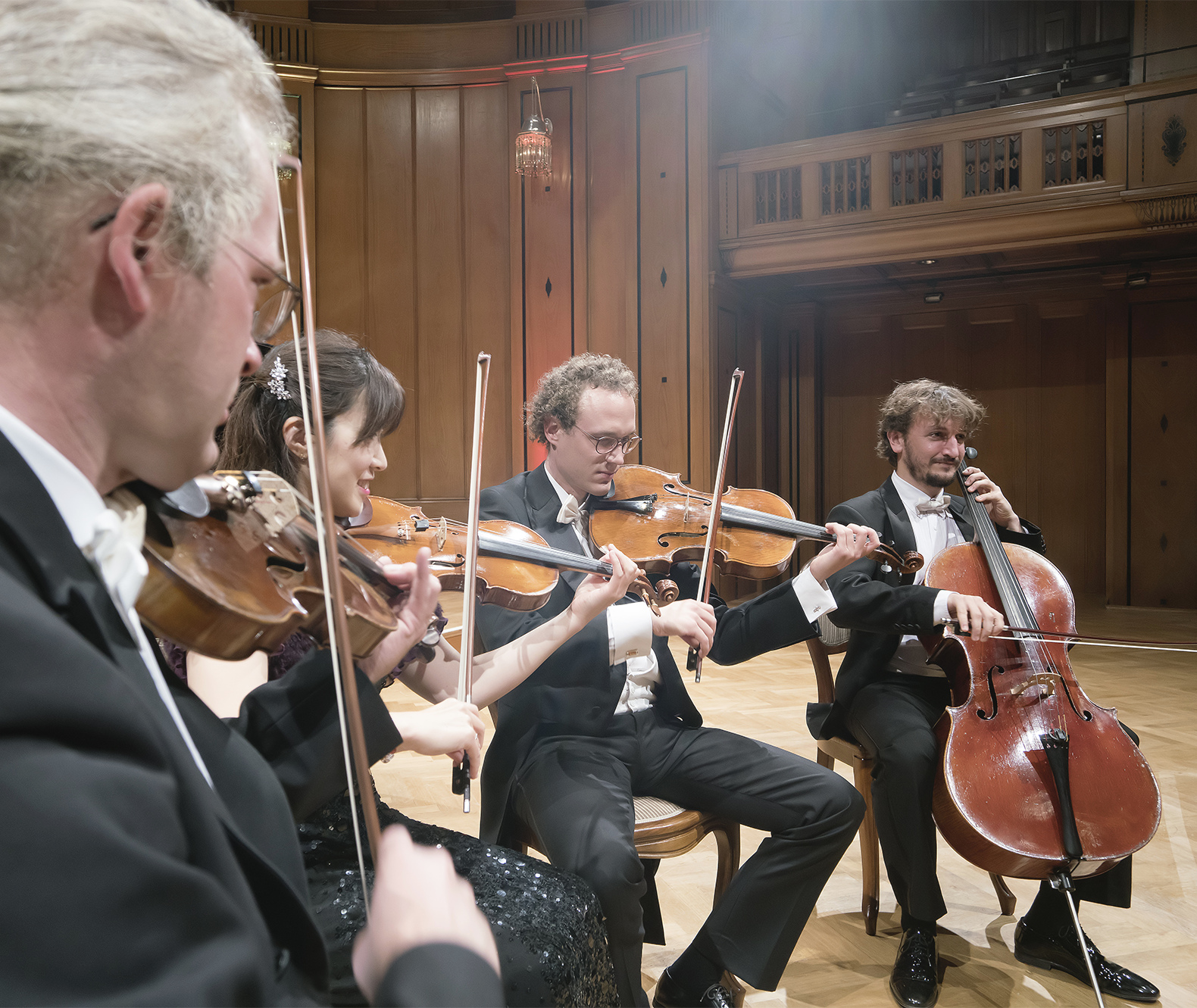 Daniel Rehfeldt ~ Violin & Leader
Yuki Mukai ~ Violin
Igor Michalski ~ Viola
Hugo Rannou ~ Cello
In 2014, the leader and manager of the Kammersinfonie Stuttgart and the Pianist Christoph Soldan took the initiative to create the Stuttgart Chamber Soloists, based on the groupleaders of the Kammersinfonie Stuttgart. The idea of the new ensemble was, to aquire and perform classical chamber music as well as symphonic repertoire, as the celebrated Stringserenades (Tchaikovsky, Suk, Fuchs...) and various Concertos for Piano and Orchestra (Mozart and Beethoven). An extensive concert series in germany was followed by a big success. In 2015 Christoph Soldan and the Stuttgart Chamber Soloists presented their repertoire in Italy, Spain and France. During springtime 2017, the artists performed several concerts with different programms in Germany („Mozart-Woche“ at the Abbey Seeon, Krefeld, Esslingen, the "Theater Dörzbach", Schwandorf, Böblingen und Sigmaringen). Since 2018 the ensemble is part of the regular concert series "Schlosskonzerte" of Kulturgipfel München. Performing in the "Nymphenburg" Munich, "Neues Schloss" Stuttgart, "Kasino" Wiesbaden, "Parktheater" Augsburg and "Allerheilig Hofkirche" Munich. The ensemble has been constituted a very high level performance and the illusion of the sound from a much bigger sized orchestra.
Daniel Rehfeldt was born in 1973 in a musicians family. He was brought to music in very early years, learning the violin, the piano and the trumpet. He won several prices as the 1. Preis "Jugend Musiziert", Tonkünstlerwettbewerb, "Parke&Davis-Förderpreis". He studied with very well known teachers like Prof. Kolja Lessing (Stuttgart), Prof. Robert-Alexander Bohnke (Freiburg) and Prof. Werner Stiefel (Reutlingen) and Klaus-Peter Hahn (Stuttgart). He continued his studies at the "Mozarteum" Salzburg (Prof. Paul Roczek and Prof. Jürgen Geise) and Baroque-Violin and ancient music at the Bruckner Conservatorie Linz (Prof. Michi Gaigg) and the Trossingen Musikhochschule (Prof. John Holloway). After his studies Daniel Rehfeldt performed as soloist and leader from Kammerensemble Cologne, and with various chamber-music-groups, such as Manchester Oboe Quartet, Jade Quartet, Soldan Trio and Adular Quartet Stuttgart. His concerts brought him all over Europe, Russia, Taiwan, Australia, Africa, China and Korea. From 2013 to 2016 Daniel Rehfeldt was leader of the Philharmonie Baden-Baden and shared the stage with international high class musicians. From 2011 Daniel Rehfeldt is leader and manager of the KammerSinfonie Stuttgart. Since 2016 additional director of the Music School in Eislingen.