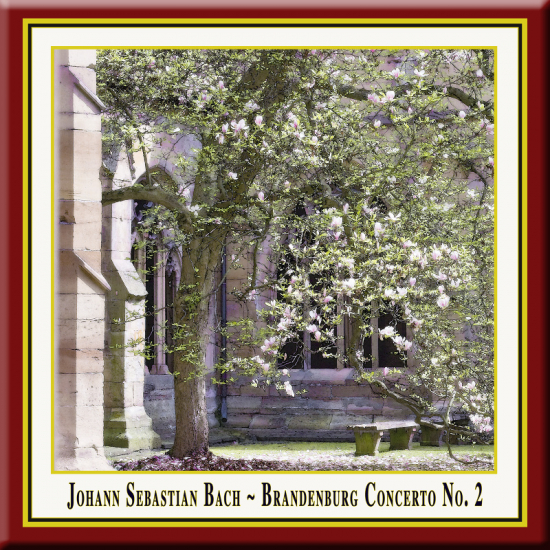 Performed by the Wolfgang Bauer Consort

he Brandenburg Concertos by Johann Sebastian Bach (BWV 1046–1051, original title: "Six Concerts à plusieurs instruments") are a collection of six instrumental works presented by Bach to Christian Ludwig, Margrave of Brandenburg-Schwedt,in 1721 (though probably composed earlier). They are widely regarded as some of the best orchestral compositions of the Baroque era.
In the Brandenburg Concerto No. 2 in F Major, BWV 1047, the trumpet part is still considered one of the most difficult in the entire repertoire, and was originally written for a clarino specialist, almost certainly the court trumpeter in Köthen, Johann Ludwig Schreiber. After clarino skills were lost in the eighteenth century and before the rise of the historically informed performance movement of the late twentieth century, the part was usually played on the valved trumpet. The clarino does not play in the second movement, as is common practice in baroque era concerti. This is due to its construction, which allows it to play only in major keys. Because concerti often move to a minor key in the second movement, concerti that include the instrument in their first movement and are from the period before the valved trumpet was commonly used usually exclude the trumpet from the second movement. The first movement of this concerto was chosen as the first musical piece to be played on the Voyager Golden Record, a phonograph record containing a broad sample of Earth's common sounds, languages, and music sent into outer space with the two Voyager probes. The third movement served as the theme for William F. Buckley, Jr.'s Firing Line.

he Wolfgang Bauer Consort was founded in 1994. Its primary occupation is the performance of authentic Baroque chamber music pieces. The English Baroque term "Consort" accurately describes an ensemble comprising one or two soloists and a continuo of cello and harpsichord. The Consort's open structure provides the fundament for the comprehensive array and musical diversity of this performance in the monastery church, whose outstanding acoustics and atmosphere are able to document the complete range of Baroque virtuosity. An addition is the Sanssouci Trio, a work written by Bernhard Krol especially for the Wolfgang Bauer Consort. The piece underlines the flexibility and power of musical expression of this traditional ensemble in many genres, up to and including contemporary compositions.
Wolfgang Bauer, the winner of, among others, the Munich ARD competition, is one of the leading international trumpet soloists. He is a professor at the Stuttgart University of Music and Performing Arts and has had consecutive engagements as solo trumpeter with the Munich Philharmoniker, the Frankfurt Radio Symphony Orchestra and Bavarian Radio's Symphony Orchestra.
Together with the basso continuo (figured bass), Thomas Strauss on harpsichord and Clemens Weigel on cello, the three form the basis of the Consort who are joined by two or three high strings, depending on the piece. Sebastian Hamann, the first concert master of the Frankfurt Opera and professor in Lucern has performed as soloist with, among others, the Opéra de la Bastille and the Cologne Philharmonic Orchestra. He can be heard here as first violin and as soloist on Johann Sebastian Bach's Sonata no. 3. Ingrid Albert from the Frankfurt Radio Symphony Orchestra on the viola and the violinists Verena Sommer, Gerhard Urban with Thomas Jauch, the solo contrabassist for the Bavarian State Opera, Munich, round off, depending on the piece, the needs of the string section. Ingo Goritzki, professor at the Stuttgart Conservatory and soloist with many orchestras and chamber music ensembles such as Villa Musica and the Stuttgarter Bläserakademie, can be heard here as oboe soloist on the Bach Concert in A Major. The multiaward winning flautist, Heidrun Laukemann, performed regularly for four years with the German Symphony Orchestra. Today, she is a freelance teacher and performer.