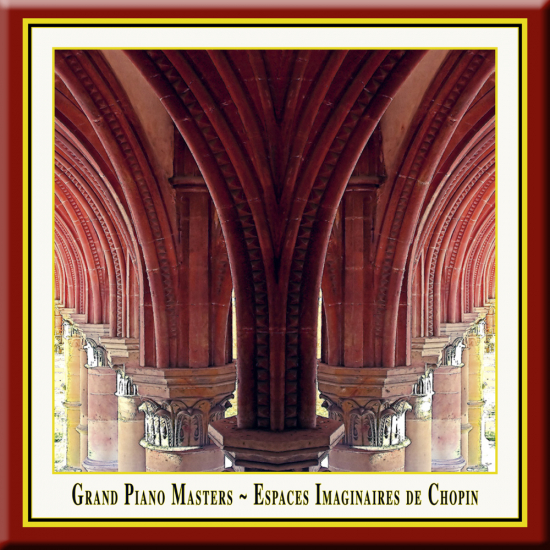 "Roses, carnations, quills and a piece of sealing wax ...
and am not even at home just now,
but somewhere else as usual,
quite different and strange ...
those 'espaces imaginaires' "
Frédéric Chopin, Nohant 1845

ndrei Gavrilov is one of the most prestigious piano soloists of the contemporary concert stage. Audience response to his performances is remarkable, the reviews ecstatic – and such has been the case since 1974, when, as an 18-year-old, he jumped in at the last minute for Svjatoslav Richter, who had been taken ill. His career since then can only be described as exemplary, with appearances at large festivals, performances with famous directors and many accredited prizes and awards as its high points. In recognition of his contribution to society, he was honoured in 1995 by the Board of International Research of American Biographical Institute (ABI) and received their Man of the Year commemorative medal in addition to the Gold Record of Achievement and World Lifetime Achievement awards. In 1998, the Philips Music Group included Andrei Gavrilov in their exquisite Great Pianists of the 20th Century collection.
The paths that led Andrei Gavrilov to Frédéric Chopin are as easy to trace as those that led him to Johann Sebastian Bach, whose Goldberg Variations are among Gavrilov's most favourite piano interpretations. That Beethoven, Mozart and, above all, Bach were, in turn, all role models for Frédéric Chopin is common knowledge. Subtlety of expression, a lyrical rendering, highly nuanced dynamics and the internalized tempo rubato are all characteristic of Gavrilov's piano. The harmonic and tonal reminiscences in Chopin — the legacy of Slavic folk music — make for yet another moment of animated interpretation. At the same time, the clarity of expression and intensity of feeling join forces and become mutually inspiring.
Gavrilov's performance begins with Chopin's later work, the Piano Sonata No. 2 avec un marche funèbre in B flat minor, Op. 35. Chopin patron Robert Schumann once remarked that this particular piece was more of a mood than a sonata because it bound most of Chopin's “unruly children' together: an animated rhythmic theme at the start, moving into a demonic scherzo that is followed by the celebrated Marche Funèbre (which the composer had published earlier) and then a mysterious Finale Presto. Yet, despite all the contradictions evident in composition and interpretation alike — from passionate and demonic to melancholic or to an elegant and formal restraint — the overall structure of this piano sonata is logical in its elements of melody, harmony and theme, while its interpretation by Gavrilov is simply intoxicating. An early ballad in G minor, Op. 23. from 1831, Chopin's first, is followed by his last, Op. 52 in F minor and written in 1843, six years before the composer's death. This has a concentrated lyricism that is typically Slavic. Originally dedicated to Baroness Rothschild and based on the tale of The Three Budry Brothers, it constituted a new music genre at the time and was introduced to instrumental music by Chopin himself. The piece draws its charm from arabesque ornamentations and certain variations and developments of these. Contrapuntal aspects, a predilection for blurred intermediate tones and the mysterious themes sit well with the brilliant clarity of Gavrilov's piano.
This is an impressive performance from a great virtuoso of the piano, held in the Lay Refectory of the medieval Maulbronn Monastery. It is followed by five of Chopin's concert etudes, “classical forms' that concentrate particularly on the technical aspects of compositions for the piano; in this particular rendering, virtuosity and expression complement each other superbly. The latter two qualities are instantly recognizable as hallmarks of Andrei Gavrilov's art and they round off this virtuoso performance. At the same time, this particular recording is impressive because artist, audience and sound engineer are, so to speak, all in the same boat: the tangible concentration on playing the instrument, the breathlessness of those listening and the precision of the recording technique all merge into a dynamic filigree of sound.

In this atmospheric recording from the beautiful medeaeval Maulbronn monastery Andrei Gavrilov plays a selection of delightful piano works by Fréderic Chopin. These include his consummate Klaviersonate Nr. 2 b-Moll op. 35, Étuden op. 10 and Balladen.

This is an atmospheric recording from the beautiful medeaeval Maulbronn monastery (an UNESCO World Heritage Site in Germany), where Gavrilov plays a selection of delightful piano works by Fréderic Chopin. I like this release very much, cause its expressive and authentic. I felt while listening that Garvrilov is playing directly in front of me. That showed me an exceeding dramatical facet of Chopin's works.

A customer on Amazon.com

This is an atmospheric recording from the beautiful medeaeval Maulbronn monastery (an UNESCO World Heritage Site in Germany), where Gavrilov plays a selection of delightful piano works by Fréderic Chopin. I like this release very much, cause its expressive and authentic. I felt while listening that Garvrilov is playing directly in front of me. That showed me an exceeding dramatical facet of Chopin's works.
A customer on Amazon.com

In this atmospheric recording from the beautiful medeaeval Maulbronn monastery Andrei Gavrilov plays a selection of delightful piano works by Fréderic Chopin. These include his consummate Klaviersonate Nr. 2 b-Moll op. 35, Étuden op. 10 and Balladen.
John Pitt on New Classics UK