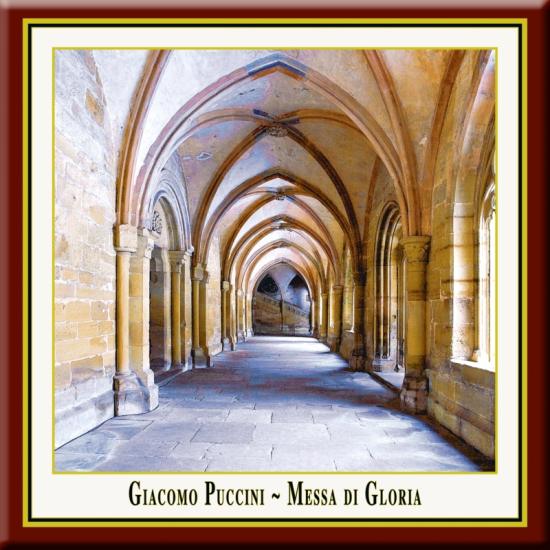 magine you are living in 19th century Italy, you're 22 years old and studying music at the Conservatory in Lucca. In just a few weeks you will submit your first big musical composition to the Conservatory's Board of Directors: your final year project for your degree, the highlight of your young life... As I see it, Giacomo Puccini's "Messa di Gloria" represents a high point in his creative work - because can you really say this is "only" one of his early works? True, you sense the brilliance, the rapture and, indeed, a little of the lack of respect typical of youth - but in actual fact, this composition is simply too beautiful for a mass back in those days. It reflects the young artist's total passion and dedication. Unlike many people who see the "Gloria" as the climax of this composition, I personally feel that the real climax is the "Agnus Dei". And the fact that it reappears later - and almost unchanged - in the opera "Manon Lescaut" is surely no coincidence.

lthough music scholars have been aware of the "Messa di Gloria" by Giacomo Puccini (1858-1924) for a considerable time, the piece only began to appear in concert programmes relatively recently. The score was in fact not published until 1951. Since then the work has been known generally as the "Messa di Gloria". It was first performed on July 12th,1880 at the Festival of San Paolino, the patron saint of bells, who is particularly revered in this part of Tuscany. This public performance brought the young composer general recognition. Puccini incorporated two other pieces of church music into the score of the Messa - a motet and a Credo that he had composed for the same festival in 1878. The entire composition had originally been conceived as a large choral work, but the final version is for two solo voices, a four-part choir and a large orchestra.
The Messa is thus the first comprehensive work by Puccini to follow the solid musical traditions of his family and deliberately use the "modern" methods of expression in vogue at the time. Puccini used his expertise in festive choral music and in adhering to the strictest conventions of counterpoint, and combined it with his own personal concept of a style for church and an innate feeling for melody that was present in him from the start. There is also a certain style to the sound that foreshadows the extraordinary mastery of orchestration apparent in his late works. Puccini was particularly fond of this early composition, proof that he attached particular importance to it. Echoes of the "Messa" reappear later in Puccini's operas, particularly in "Edgar" and "Manon Lescaut". In fact, the "Madrigale" in Act 2 of Manon contains almost the entire "Agnus Dei", with only very few structural changes. Bearing all this in mind, it is no wonder that Puccini's Messa is so highly appreciated today.

illi Stein (Tenor) was born in Limburg an der Lahn. He studied voice with the vocal-soloists Pfeifle and Prof. Alfred Sandor Kónja and attended the opera school at the State Academy of Music in Stuttgart. Furthermore, he masterclasses with Maestra Prof. Raggi Valentini in Pesaro. He sang at various stages supporting opera and operetta roles, such as "The Rodolfo" from "La Bohème", "The Duke" of "Rigoletto" and "Cavaradossi" in "Tosca". In 1984, he was a participant in the Final Luciano Pavarotti Competition in Modena.

homas Pfeiffer (Baritone) already unfolded his concert activities while still a student. He made guest appearance at the the Art Festival of Weimar with a "Goethe evening song" and with Schubert song cycle Die Schöne Müllerin at the Marienbad Festival in Tschechien, Mahler's of Lieder eines Fahrenden Gesellen, he made music with the Vogtland Philharmonic in Reichenbach and Greiz. He was soloist in J.S. Bach's Mass in B minor (BWV 232) with the orchestra "Les Amoureux" in Paris and with the Festival of the Besancon in France, with opera productions of works by Mozart, Haydn, Felix Mendelssohn and Smetana; with the Rossini Festival in Bad Wildbad; the Festival of Ludwigsburg, at the Danube Festival Week in Austria and with "Ars-Musica" in Berne. Beside numerous Lieder recitals and oratorio concerts in his homeland, the tours abroad with renowned choirs represent further important stations of his singing career. So, among other things, Thomas Pfeiffer has appeared with the Kantatenchor Tübingen in Orff's Carmina Burana in Spain and Bach's Matthäus-Passion (BWV 244) in Greece; with the Kammerchor Stuttgart in works of Jan Dismas Zelenka and Bach in Italy and Austria, with the Bachchor Karlsruhe in Händel's Salomo in France. Among his most important CD productions: The three Schubert song cycles, Lieder by Richard Strauss, Rückert-Vertollungen (Schubert, Clara Schumann and Robert Schumann, Johannes Brahms, Mahler, Reutter, Komma), Beethoven Lieder, the Mozart's Singspiel Zaide and and Rosssini's, Petite Messe solennelle. He has also participated in numerous TV and radio productions. Thomas Pfeiffer particpates in the jury of music competitions and gives singing courses, among other things for the German Tonkünstlerverband and the Intemationalen working group for music. Since 1992 he is a professor for singing at the National University for Music and Art in Stuttgart. 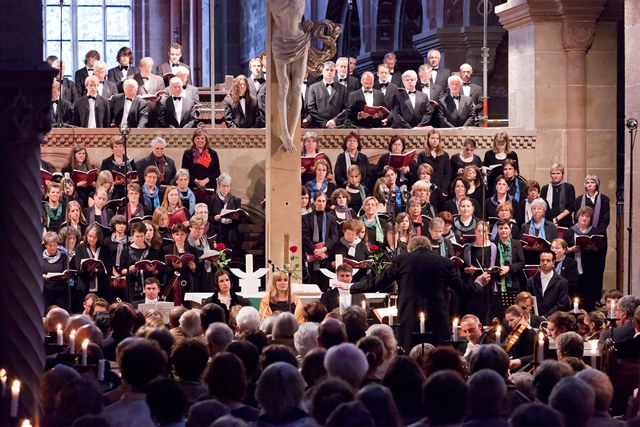 he Maulbronn Cantor Choir (German: Kontorei Maulbronn) is the large oratorio choir of the monastery in Maulbronn. The choir was founded in 1948 as a federation of the Evangelic Church Choir Maulbronn and the choir of the Evangelic Seminar Maulbronn. In this tradition the choir is formed today with ambitious choral singers from the region and students and former students of the Seminar Maulbronn (gymnasium with boarding school). Over those many years of its existence the choir has performed the complete repertoire of popular oratorios and worked together with orchestras like the 'Southwest-German-Radio-Symphony-Orchestra Baden-Baden and Freiburg', the 'Central German Chamber Orchestra', the 'Southwest German Chamber Orchestra Pforzheim' or the 'Baden Philharmonic Orchestra'. Soloists of these performances were artists like Barbara Schlick, Maya Boog, Sandra Moon, Sophie Daneman, Marga Schiml, Elisabeth von Magnus, Hans Peter Blochwitz, Aldo Baldin, Marc Clear, Markus Brutscher, Peter Lika, Gotthold Schwarz and Ludwig Güttler. The German television station ZDF broadcasted a portrait about the Choir, and the choir has participated in live radio recordings for the SDR, SWR, Deutsche Welle and Deutschlandfunk. 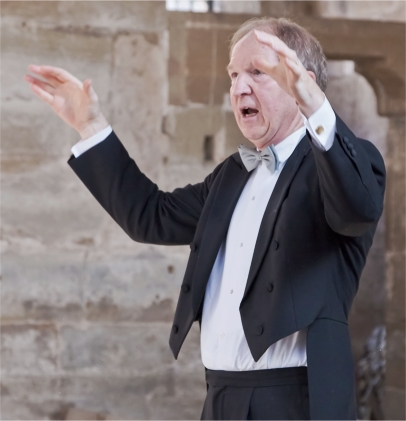 rof. Jürgen Budday (born 1948) is conductor, director of church music, music teacher and artistic director of the concert series at the UNESCO World Heritage Site Maulbronn Abbey. He started teached at the Evangelical Seminar in Maulbronn from 1979 till 2012. This also involved his taking over as artistic director of the Maulbronn Monastery Concerts and the cantor choir in 1979. He studied church music and musicology at the Academy of Music in Stuttgart from 1967 to 1974. In 1992, he was named Director of Studies, in 1995 came the appointment as Director of Church Music and in 1998 he was honored with the "Bundesverdienstkreuz" (German Cross of Merit) as well as the Bruno-Frey Prize from the State Academy in Ochsenhausen for his work in music education. In 1983 Jürgen Budday founded the Maulbronn Chamber Choir (Maulbronner Kammerchor) with whom he won numerous national and international awards. At the Prague International Choir Festival, for example, Jürgen Budday received an award as best director. Since 2002, he has also held the chair of the Choral Committee of the German Music Council and became director and jury chairman of the "German Choir Competition" (Deutscher Chorwettbewerb). In 2008, he received the silver Johannes-Brenz-Medal, the highest honoring of the Evangelical-Lutheran Church in Wuerttemberg. Jürgen Budday was honoured in 2011 with the honorary title "Professor". In May 2013 Prof. Jürgen Budday was awarded by the Association of German Concert Choirs with the "George-Frideric-Handel-Ring" - one of the highest honors for choir conductors in Germany. Thus Jürgen Budday followed Helmuth Rilling, who was honored with the ring from 2009 till 2013.
Jürgen Budday has started a cycle of Handel oratorios that is planned to span several years, which involves working with soloists like wie Emma Kirkby, Miriam Allan, Michael Chance, Nancy Argenta, Mark Le Brocq, Charles Humphries, Stephen Varcoe (to name but a few). The live recordings of these performances, that have received the highest praise from reviewers, has won him international recognition. Till these days 11 oratorios by G.F.Handel are documented on discs.
"No conductor and no choir have so consistently recorded so many Handel oratorios as Jürgen Budday and his Maulbronn Chamber Choir." (Dr. Karl Georg Berg, Handel Memoranda Halle 2008).

In this atmospheric concert recording from the convent church in Maulbronn in 2001, Giacomo Puccini's Messa di Gloria is performed by Willi Stein (tenor), Thomas Pfeiffer (baritone), Kantorei Maulbronn, and members of the SWR Symphony Orchestra of Baden-Baden & Freiburg, ably conducted by Juergen Budday. A sumptuous CD.