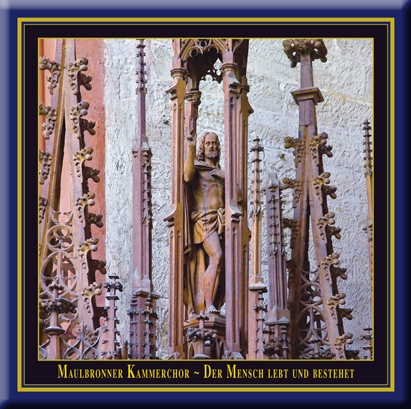 t must have been at the turn of the new century when I had a conversation with Jürgen Budday in the cloister of the Maulbronn monastery and talked of how superb the church was as a performing space and how its atmosphere might be put to use. By expanding the dimensions of the performance and incorporating the audience into the tension, the euphoria of the concert, without a single instrument – with the pure power of those human gifts that we receive from our Creator at the moment of birth. But you know, of the many demands that a project like this makes of those involved, I want to single out just one – the human factor, plain and simple.
When a group of people work together, it takes time to develop a certain intimacy, to acquire experience of working as a team – simply to establish respect and friendship. For, after more than ten productions, we have come to know “our Chamber Choir” very well, to realize what high demands the choir director and the singers make of themselves. All of them have worked hard for this live recording, on the concept as well as the music, just to capture the moment, to give you pleasure – and this over and above the daily demands of their private and professional lives. I would like to take this opportunity to thank everyone who participated and leave it to the director to explain the content and concept of the programme in the section that follows.

he Maulbronn Chamber Choir was founded by its director, Jürgen Budday, in 1983 and is one of the top choirs in Germany today. In addition to learning a baroque oratorio, the ensemble compiles a sacred and secular a-cappella programme every year, its focal point being 19th and 20th century literature. First prize at the Baden Württemberg Choir Competition in 1989 and 1997, second prize at the Third German Choir Competition in Stuttgart in 1990, and a victory at the Fifth German Choir Competition in Regensburg in 1998 document the chamber choir's extraordinary musical standard. The Maulbronn Chamber Choir has received, among others, invitations to the Ettlingen Palace Festival, the chamber music series of the Dresden Philharmonic, the cloister concerts at the Walkenried convent, the First International Festival of Sacred Music in Rottenburg, and the European Music Festival in Passau. The choir has also made a name for itself internationally. The 1983 debut tour through the USA with concerts in, among others, New York and Indianapolis, and the participation in the Festival of Music in New Harmony, Indiana, as well as concert tours through numerous European countries, Israel, Argentina (1993 and 1997), South Africa, and Namibia (2001) were all greeted with similar enthusiasm by the public and critics alike. The third tour through South America followed in autumn 2003 with concerts in Argentina and Uruguay.

ürgen Budday (Conductor) is artistic director and founder of the Maulbronn Chamber Choir. He studied church music and musicology at the Academy of Music in Stuttgart from 1967 to 1974 and, since 1979, he has taught at the Evangelical Seminar in Maulbronn. This also involved his taking over as artistic director of the Maulbronn Monastery Concerts and the cantor choir. In 1992, he was named Director of Studies, in 1995 came the appointment as Director of Church Music and in 1998 he was awarded the "Bundesverdienstkreuz" (German Cross of Merit) as well as the Bruno-Frey Prize from the State Academy in Ochsenhausen for his work in music education. At the Prague International Choir Festival, Jürgen Budday received an award as best director and, since 2002, he has also held the chair of the Choral Committee with the German Music Council. Jürgen Budday has started a cycle of Handel oratorios that is planned to span several years, which involves working with soloists like Emma Kirkby, Michael Chance, Nancy Argenta and Mark Le Brocq (to name but a few). The live recordings of these performances, that have received the highest praise from reviewers, has won him international recognition. Till these days 10 oratorios by G.F.Handel are documented on discs.
"No conductor and no choir have so consistently recorded so many Handel oratorios as Jürgen Budday and his Maulbronn Chamber Choir."
(Dr. Karl Georg Berg, Handel Memoranda Halle 2008)