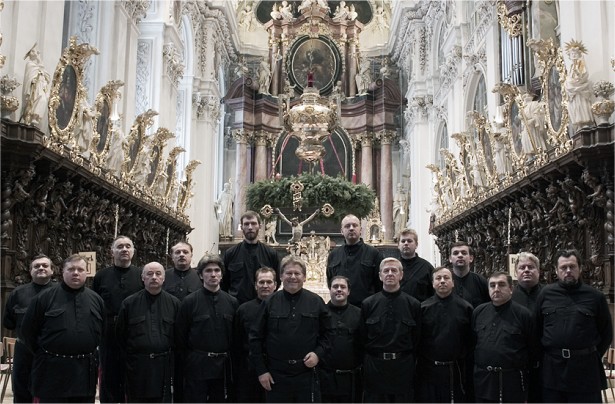 The choir was founded in 1991 by Wanja Hlibka and George Tymczenko. Both were soloists in the world famous Don Cossacks Choir until its disbandment in 1979 and are thus well qualified to continue the tradition. Wanja Hlibka was their youngest soloist, from 1967 to 1979 and feels particularly obligated to the ensembles memory. He gathered together first class soloists from the Bolschoi Theatre in Moscow and the Kiev and Odessa Operas to form the successor choir, whose unique dynamic spectrum, from the transparency of a Gregorian chant to the vocal authority of an operatic chorus, is probably unmatched. The choir performs live and without the aid of amplification, even in such large venues as the Musikhalle in Hamburg, the Messehalle in Frankfurt or the Gewandhaus in Leipzig. The repertoire is the same as the former original choir‘s, with all scores being transcripts from Serge Jaroff‘s private music library, presently in the care of his son, Alexeij, in America.
Wanja Hlibka was born into a Russian-German family in 1948 in Petershausen, near Munich. He had his first private singing lesson at the age of 17 and was engaged only two years later by Serge Jaroff. During breaks from touring, he studied music at the Hamburg Conservatory and later singing with Professor Josef Metternich in Faldafing near Munich.
Despite repeated offers from opera houses, he remained loyal to Serge Jaroff until the disbandment of the choir. He still exclusively dedicates his voice to Russian music. Wanja Hlibka sees, now as then, his most important task to be the furtherance of Serge Jaroff's art.
© Copyright by K&K Verlagsanstalt. All rights reserved.