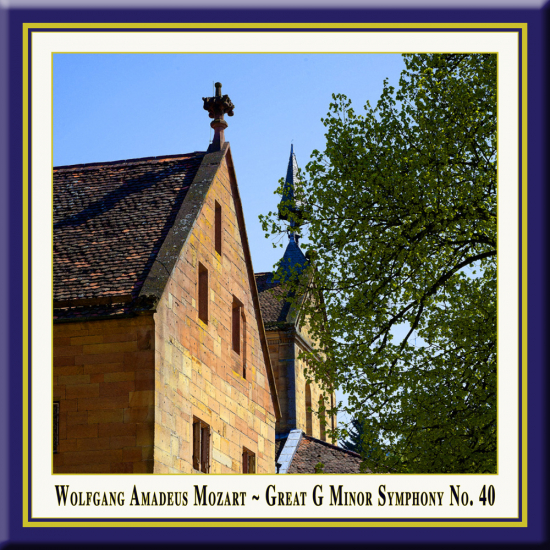 he Symphony No. 40 in G minor, K. 550, was written by Wolfgang Amadeus Mozart in 1788. It is sometimes referred to as the "Great G minor symphony", to distinguish it from the "Little G minor symphony", No. 25. The two are the only extant minor key symphonies Mozart wrote.
The date of completion of this symphony is known exactly, since Mozart in his mature years kept a full catalog of his completed works; he entered the 40th Symphony into it on 25 July 1788. Work on the symphony occupied an exceptionally productive period of just a few weeks during which time he also completed the 39th and 41st symphonies (26 June and 10 August, respectively). Nikolaus Harnoncourt conjectured that Mozart composed the three symphonies as a unified work, pointing, among other things, to the fact that the Symphony No. 40, as the middle work, has no introduction (unlike No. 39) and does not have a finale of the scale of No. 41's.
The 40th symphony exists in two versions, differing primarily in that one includes parts for a pair of clarinets (with suitable adjustments made in the other wind parts). Most likely, the clarinet parts were added in a revised version.[5] The autograph scores of both versions were acquired in the 1860s by Johannes Brahms, who later donated the manuscripts to the Gesellschaft der Musikfreunde in Vienna, where they reside today.
As Neal Zaslaw has pointed out, writers on Mozart have often suggested - or even asserted - that Mozart never heard his 40th Symphony performed. Some commentators go further, suggesting that Mozart wrote the symphony (and its companions, Nos. 39 and 41) without even intending it to be performed, but rather for posterity, as (to use Alfred Einstein's words) an "appeal to eternity".
Modern scholarship suggests that these conjectures are not correct. First, in a recently discovered 10 July 1802 letter by the musician Johann Wenzel (1762–1831) to the publisher Ambrosius Kühnel [de] in Leipzig, Wenzel refers to a performance of the symphony at the home of Baron Gottfried van Swieten with Mozart present, but the execution was so poor that the composer had to leave the room.
There is strong circumstantial evidence for other, probably better, performances. On several occasions between the composition of the symphony and the composer's death, symphony concerts were given featuring Mozart's music for which copies of the program have survived, announcing a symphony unidentified by date or key.
These include:
· Dresden, 14 April 1789, during Mozart's Berlin journey
· Leipzig, 12 May 1789, on the same trip
· Frankfurt, 15 October 1790
Copies survive of a poster for a concert given by the Tonkünstler-Societät (Society of Musicians) 17 April 1791 in the Burgtheater in Vienna, conducted by Mozart's colleague Antonio Salieri. The first item on the program was billed as "A Grand Symphony composed by Herr Mozart".
Most important is the fact that Mozart revised his symphony (see above). As Zaslaw says, this "demonstrates that [the symphony] was performed, for Mozart would hardly have gone to the trouble of adding the clarinets and rewriting the flutes and oboes to accommodate them, had he not had a specific performance in view." The orchestra for the 1791 Vienna concert included the clarinetist brothers Anton and Johann Nepomuk Stadler; which, as Zaslaw points out, limits the possibilities to just the 39th and 40th symphonies.
Zaslaw adds: "The version without clarinets must also have been performed, for the reorchestrated version of two passages in the slow movement, which exists in Mozart's hand, must have resulted from his having heard the work and discovered an aspect needing improvement."
Regarding the concerts for which the Symphony was originally intended when it was composed in 1788, Otto Erich Deutsch suggests that Mozart was preparing to hold a series of three "Concerts in the Casino", in a new casino in the Spiegelgasse owned by Philipp Otto. Mozart even sent a pair of tickets for this series to his friend Michael Puchberg. But it seems impossible to determine whether the concert series was held, or was cancelled for lack of interest. Zaslaw suggests that only the first of the three concerts was actually held.
The symphony is scored (in its revised version) for flute, 2 oboes, 2 clarinets, 2 bassoons, 2 horns, and strings.

From Wikipedia, the Free Encyclopedia

he Wuerttemberg Chamber Orchestra Heilbronn (Württembergisches Kammerorchester Heilbronn) has been together since 1960. Performances range from Baroque works, classical (also in symphonic cast), string compositions of the Romanesque period and early modernity, as well as avant-garde works. The orchestra plays at all relevant concert halls around the globe on large tours or at individual concerts with soloists such as Anne-Sophie Mutter, Maurice André, Alfred Brendel, James Galway, Viktoria Mullova, Frank Peter Zimmermann, Thomas Quasthoff, Martha Argerich and Sharon Kam. In addition, the orchestra places special emphasis on co-operation with fresh young soloists.

örg Faerber, Head Conductor of the Wuerttemberg Chamber Orchestra Heilbronn, was born in Stuttgart where he later received his degree in conducting at the state conservatory (Staatliche Hochschule für Musik). After an eight-year career as a theatre bandmaster and composer for opera and movie, he founded the Wuerttemberg Chamber Orchestra Heilbronn in 1961, which, under his direction, grew to become one of Europe's leading chamber orchestras. He is regarded as one of the most renowned conductors of his time. In 1984 Jörg Faerber was awarded the German Federal Cross of Merit, and, in 1986, the academic title of Professor.

Thank you for posting. Excellent interpretation, I love the very relaxed tempo. Video presentation is outstanding as well, the audio and video complement each other perfectly.

What a great recording

What a great recording

Thank you for posting. Excellent interpretation, I love the very relaxed tempo. Video presentation is outstanding as well, the audio and video complement each other perfectly.
MPBrewster on YouTube