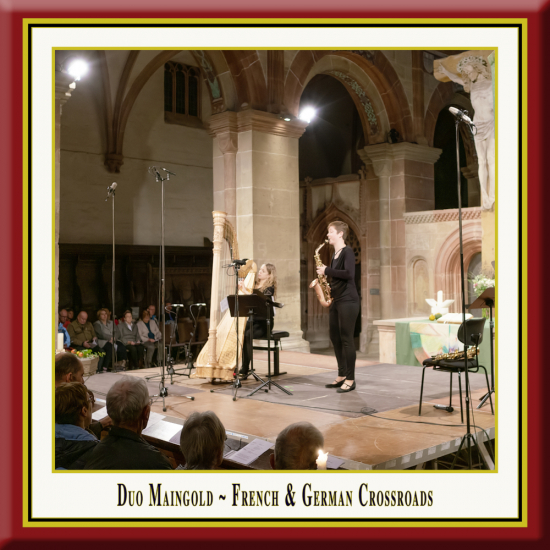 A concert for Harp and Saxophone,
performed by Duo Maingold

n early December 1849, Robert Schumann composed in Dresden within five days the "Three Romances op. 94" in the original version for oboe and piano, which he gave to his wife Clara for Christmas as "his hundredth opusculum". The first performances were given by most renowned musicians: on 27 December 1849 in a home concert with the concertmaster of the Royal Chapel, François Schubert, and on 24 January 1850 with the composer and pianist Carl Reinecke in the Leipzig Gewandhaus. This quiet lyrical work is the starting point for further works in which Schumann experimented with freer forms and explored further sound options of the wind instruments in combination with a piano.

The "Sonata in G minor BWV 1020" has an eventful history. Shortly after its composition, it was first identified as a sonata for violin and keyboard instrument by Johann Sebastian Bach, but doubts about the old master's authorship arose as early as the time of Philipp Spitta. The style did not suit Bach, and a reliable copy in Vienna also mentions Carl Philipp Emanuel Bach as the composer. The attribution to the violin was also doubted, as there were no violin-specific effects. The whole style fitted much better to a flute. And although the sonata is now attributed to the Bach son Carl Philipp Emanuel, it nevertheless retains the ordinal number from the Bachwerkeverzeichnis. The first movement is characterized by harpsichord arpeggios, while the solo instrument quotes a theme from the great B minor flute sonata by father Johann Sebastian Bach. The second movement is pastoral, while the last movement comes along impetuously in the gesture of "Sturm und Drang".

The French conductor, arranger and composer Paul Bonneau (1918-1995) became known primarily through his film music and compositions in the field of entertainment music. He composed four works for saxophone solo, one of which is the "Caprice en forme Valse" in 1950. With typical French characteristics and difficult technical passages, it is a highly appreciated and varied piece for solo saxophone, in which large patches and small speckles of colour ignite a musical firework.

Claude Debussy loved the sea, where he found peace and quiet. He spent a lot of time in Cannes with his wife. And he was fascinated by the play with sounds. The "Rêverie" was probably composed between 1880 and 1884, and in a meditative character Debussy already creates a dreamlike atmosphere with a special sound, to which the gentle, repetitive theme contributes. The "Two Arabesques", written in 1888 and 1891, are two of Debussy's earliest impressionist pieces, in which the composer seems to change modes and keys frequently. Arabesque No. 2 is a fast, lively piece that also has echoes of the pentatonic.

Gustav Bumcke played a major role in establishing the saxophone in concert life. From his trip to Paris in 1902 he had brought back a whole set of saxophones to Berlin, where he subsequently founded various saxophone ensembles. He wrote more than 40 compositions for saxophone in all genres and a five-volume series of saxophone etudes. The "Notturno in E flat major op. 45" did not appear in print until 1992. The lyrical, aria-like melody in the saxophone, the flowing semiquaver motion of the harp and the limited length of the phrases pleasantly wrap up an etude to improve intonation and the ability to play in an ensemble.

Ida Gotkovsky's aim is to create universal works of art with her music, which in its characteristic contemporary language and energetic structures contributes to the unity of musical expression of all times. "Eolienne" was composed in 1970 for flute and harp. The five movements of the work are of very different character, like extremely different pictures, which together form a single, poetic work.

The composer and music educationalist Jacques de la Presle admired Fauré, Ravel, Debussy and Poulenc, while rejecting Wagner and Stravinsky. "Le jardin mouillé for harp" was composed in 1913, triggered by the poem "Le jardin mouillé" by Henri de Regnier about a rain-soaked garden, in which the visitor listens softly to the whispering of the drops and can perceive the different sounds of the drops on leaves, gravel or grass.

In contrast to Jacques de la Presle, Jacques Ibert was quite open to the music of a Stravinsky and musically can be located between neoclassicism and modernism. Ibert composed "Entr'acte" in 1937, a playful Caprice that is not committed to absolute music and belongs to the standard repertoire for harpists who love the lively piece in rondo form with a slight Spanish touch. 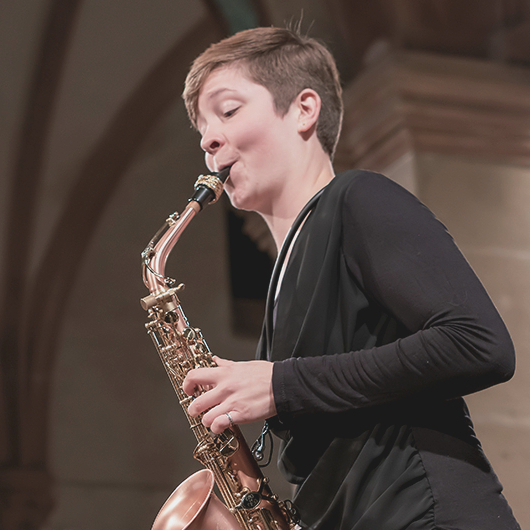 hristina Bernard, born in Erlangen in 1995, began her young studies at the age of 16 at the Hochschule für Musik Würzburg, where she has been continuing her studies with Lutz Koppetsch since 2013. She supplemented her education with master classes with Arno Bornkamp, Joonatan Rautiola, Jan Schulte-Bunert, Vincent David, Lars Mlekusch and Johannes Thorell, among others. Christina Bernard has won numerous prizes, including first federal prizes at the Jugend musiziert competition, third prize at the Berthold Hummel competition in Würzburg, first prize at the first J. Pakalnis International competition for Wind and Percussion Instrumentalists in Lithuania, first prize at the 23rd International Louis Spohr competition and first prize as well as sponsorship prizes at the competition for the Wolfgang Fischer and Maria Fischer-Flach prize. In 2018 she received a scholarship from the Deutscher Musikwettbewerb, combined with an acceptance into the 63rd Bundesauswahl-Konzerte for young artists. Christina Bernard is a scholarship holder of the Studienstiftung des deutschen Volkes, from Yehudi Menuhin "Live Music Now" and was supported by the Germany Scholarship. The saxophonist gained orchestral experience as a member of the National Youth Orchestra of Germany, the WDR Symphony Orchestra Cologne, the Essen Philharmonic, the Würzburg Philharmonic and the Thuringia Symphony Orchestra, among others. As a soloist, she has made guest appearances with the chamber orchestra in Bishkek in Kyrgyzstan and the ensemble orchestra of the National Philharmonic Society Musica Humana Juventus in Lithuania... www.christina-bernard.com 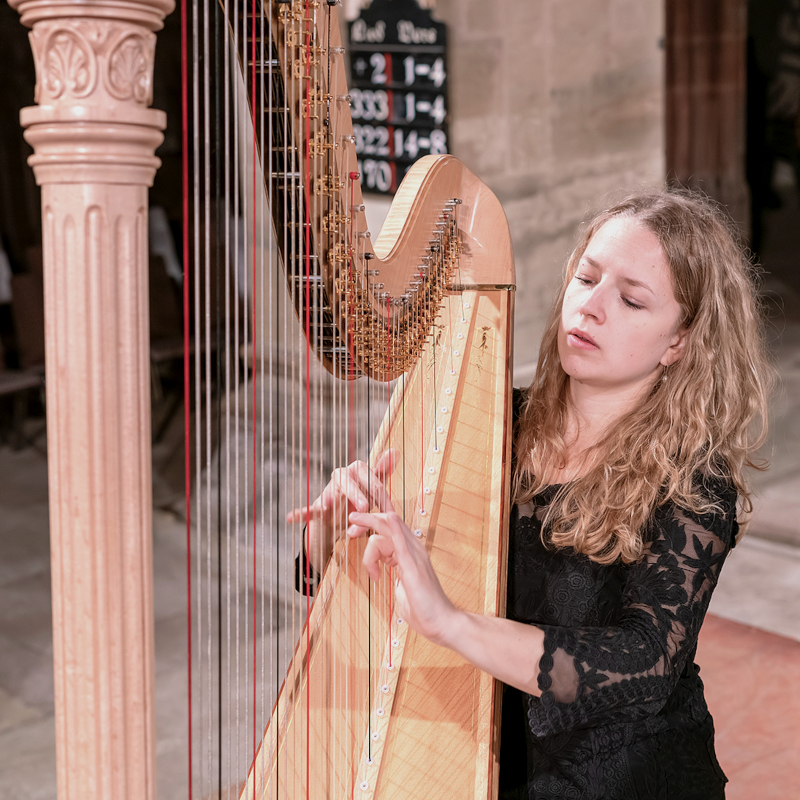 wenty-one year old Lea Maria Löffler began her musical education with the violin at the age of four. One year later she discovered her love for the harp. Her former teachers include Judith Geissler, Silke Aichhorn, Prof. Andreas Mildner and Prof. Mirjam Schröder. From 2008-2013 she studied in the pre-college at the University of Music in Würzburg and from 2013-2016 in the pre-college at the University of Music in Detmold, where she has been continuing her bachelor studies since 2016 under the tutelage of Godelieve Schrama. From 2018-2019 she studied in the class of Isabelle Moretti at the Conservatoire national supérieur de musique et de danse in Paris. In 2018, she won a scholarship at the Deutscher Musikwettbewerb and got admission to the Bundesauswahl Konzerte Junger Künstler (National Selection of Young Musical Artists), as well as the special prize of the Verband der Harfenisten in Deutschland. Lea Maria Löffler was a laureate of the International Franz Josef Reinl harp competition in 2018, the International Félix Godefroid harp competition in 2012, and the Verband der Harfenisten harp competition in 2010. She is supported by the Studienstiftung des deutschen Volkes since 2018, the Dr. Franz Stüsser Stiftung since 2017, and the Werner Richard - Dr. Carl Dörken Stiftung since 2015. In 2016 she was invited by the Werner Richard - Dr. Carl Dörken Stiftung to tour as part of the Best of NRW concert series and present solo recitals. Furthermore, she was awarded with the Conrad von der Goltz scholarship of the University of Music in Würzburg, and won special prizes of the Sparkassen NRW and the Hindemith Stiftung. As a harp soloist, Lea Maria Löffler has performed with renowned orchestras, such as the Würzburger Philharmoniker and the Bergische Symphoniker. She has also gained orchestral experience with orchestras such as the National Youth Orchestra of Germany. Regular solo appearances and concert tours have taken her to a wide variety of concert halls in Germany and abroad. Lea Maria Löffler appears on television and her concerts have been broadcasted by several national radio stations such as the BR (Bavarian Broadcasting), the WDR (Westgerman Broadcasting), and the Deutschlandfunk. Several CDs bear witness to her artistic work... www.lea-maria-loeffler.de

This release is featured in the editorial playlist on Spotify​:
CLASSICAL NEW RELEASES
Updated every Friday with the very best classical new releases

This release is featured in the editorial playlist on Spotify​:
CLASSICAL NEW RELEASES
Updated every Friday with the very best classical new releases
https://open.spotify.com/playlist/37i9dQZF1DWV0gynK7G6pD
March 18, 2022