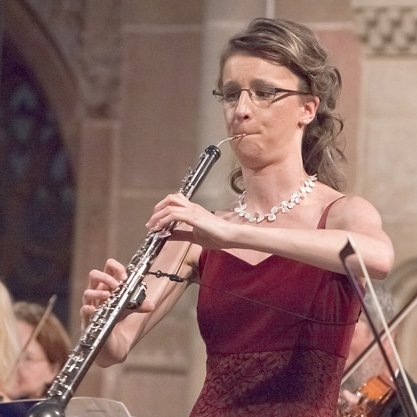 Mirjam Budday, born 1980, was the recipient of scholarships from the Studienstiftung des Deutschen Volkes, the chamber music foundation Villa Musica, the Rotary club and was also a prize winner of the Jugend Musiziert competition. She completed her Undergraduate studies in Stuttgart with Prof. Ingo Goritzki, and from 2002-2003 she spent one year studying at the Royal Academy of Music in London with Tess Miller, Douglas Boyd and Celia Nicklin. Mirjam has also taken part in numerous master classes with teachers such as Prof. Christian Wetzel, Albrecht Mayer, Jonathan Kelly, Alexei Ogrintchouk and Prof. Günther Passin. From January until July of 2004 she played with the Baden State Opera, Karlsruhe. During the years 2004 through 2005 she was Principal Oboist of the European Union Youth Orchestra with whom she toured through Scandinavia and the Baltic States under the direction of Paavo Järvi and Yan Pascal Tortelier. She has gone on to work with the Bamberg Symphony orchestra, the Stuttgart Opera and the North-west German Radio Philharmonic and plays regularly as Principal Oboist with the South-west German Chamber Orchestra.