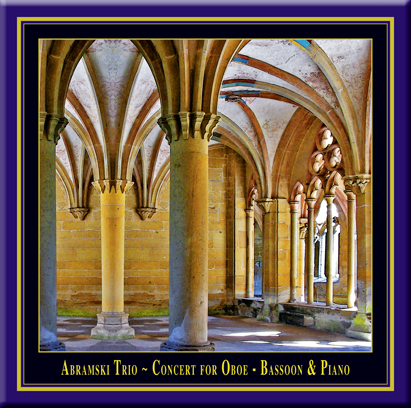 The Trio for Oboe, Bassoon and Piano was commissioned by the International Double Reed Society, the British Double Reed Society, the IDRS Germany e.V., the Japan Bassoon Society and the 24th International Double Reed Festival in Rotterdam. The première took place at the Rotterdam Festival in September 1995. The combination of Piano, Oboe and Bassoon is very unusual and there are therefore, only a handful of original works composed specifically for this ensemble combination. Jean Françaix himself wrote in a letter dated 11th August 1995: "This combination of instruments balances better than that of violin, cello and piano. All too often the strings are drowned by Steinway power: but the oboe and bassoon can get the pianist to dance to their tune without making him draw in his claws - which most of them hate having to do." The character and harmonies within the Trio are very French and typically Françaix! The work requires technical dexterity and lyrical expressiveness from all three musicians.

The bassoon is often considered the clown of the orchestra but in his Sonata for Bassoon and Piano Saint-Saëns explores the elegant and dignified nature of the instrument. He began composing at the age of three and completed approximately three hundred works. Other French composers such as Poulenc and Ravel were said to have been inspired by Saint-Saëns, and Poulenc is even alleged to have borrowed musical ideas from him! The woodwind sonatas belong to his later works and were each dedicated to highly regarded players of the era. The Sonata for Bassoon is dedicated to his friend, Leon Letellier, and who was also the principal bassoonist of the Paris Opera orchestra. The piece begins in the high tenor register and emerges from, what seems like nothing - as if the melody had been hanging in the air just waiting to be heard before unfolding to become an elated melody. The second movement is a virtuosic scherzo which exemplifies the typically humorous character of the bassoon. The third movement begins once again with a floating melody that evolves into an impassioned middle section characterized by rhythmic passagework before the reprise disperses the tension eventually ending on an imperfect cadence which leads directly into the juxtaposed circus like finale.

Written between 1919 and 1920 at the request of the famous ballet impresario Sergey Diaghilev, La Valse was intended as a tribute to the Waltz style made popular by Johann Strauss. In contrast to Ravel's initial conception, he subsequently transformed La Valse into a cataclysmic and macabre tone poem which came to signify the despair and destruction of World War 1. In his own words: "I feel that this work is a kind of apotheosis of the Viennese waltz, linked in my mind with the impression of a fantastic whirl of destiny." When Ravel finally presented the work to Diaghilev, the latter famously dismissed it, and their working relationship ended. Ravel originally wrote La Valse for Solo Piano, then for Two-Pianos, and finally for orchestra. The original Solo Piano version leaves out too many "orchestral" details so the version presented here contains additional textures from the version by A. Icharev and also from Abramski himself.

When the Greek hero Theseus sailed away to do battle with the Minotaur, his father, King Aegeus, feared greatly for his life. In order not to endure the anxiety a moment longer than necessary, he asked Theseus to change the black sail of his ship to white if he was victorious, and spend each day alone on a cliff-top watching for the vessel's return. Theseus was successful, but in the elation of slaying the Minotaur he forgot his promise. Seeing the black sail, the despairing Aegeus threw himself from the cliff into the sea which has born his name to this day - the Aegean. "The piece is a meditation on Aegeus's vigil, motionless and noble, his thoughts a turmoil of alternating hope and fear. Towards the end of the work, over a rhythmic piano ostinato, the oboe (which identifies with the King throughout) increasingly builds a sense of wild elation at thoughts of Theseus's victory and return, giving way at the climax to feelings of despair and bereavement. Crashing chords in the bass and the cries of the oboe are portents of what is to come when he sees the black sail, but the ending leaves Aegeus still on the cliff-top; solitary and waiting."

In 1920 Francis Poulenc was counted amongst the "Groupe des Six" which included the composers Darius Milhaud, Arthur Honegger, Louis Durey, Jean Cocteau, Germaine Tailleferre and Georges Auric. Technically speaking this was not a Society but rather the creation of a music journalist who simply used these representatives of Modernism as an analogy to "The Mighty Handful", the group of five Russian Composers including Mussorgsky and Balakirev in the second part of the 19th Century. The Trio was composed in 1926 and is dedicated to the Spanish composer Manuel de Falla. It is written in the typical quick - slow - quick form and is considered to be amongst Poulenc's finest works. It is also the first instance of Poulenc giving a more dominant role to the piano within his chamber music writing.

he Abramski Trio decided to form a permanent ensemble after a successful informal concert at the Monastery in Maulbronn and have gone on to perform regularly together. The group is made up of young musicians who met during studies at the College of Music in Stuttgart. Whilst playing together at the Badischen Staatstheater in Karlsruhe during the 2003/04 season a spontaneous Trio concert turned into something much more...
The ensemble decided to make it their aim to perform seldom played works for double reed instruments in the unconventional form of Oboe, Bassoon and Piano, similar to the classical Piano trio. Composers such as Poulenc and Francaix are well known for their lively, humorous and imaginative wind chamber music, the performance of which the young musicians of the Abramski trio are ably adept to perform. The role of Pianist Ron Abramski is not just to sensitively accompany but through his solo performances to complement each concert.
In 2006 the Abramski trio performed in the renowned concert series in the Monastery at Maulbronn and in September 2007 were finalists in the "2nd International European Chamber music competition" in Karlsruhe.
For further information go to www.abramskitrio.de

Mirjam Budday, born 1980, was the recipient of scholarships from the Studienstiftung des Deutschen Volkes, the chamber music foundation Villa Musica, the Rotary club and was also a prize winner of the Jugend Musiziert competition. She completed her Undergraduate studies in Stuttgart with Prof. Ingo Goritzki, and from 2002-2003 she spent one year studying at the Royal Academy of Music in London with Tess Miller, Douglas Boyd and Celia Nicklin. Mirjam has also taken part in numerous master classes with teachers such as Prof. Christian Wetzel, Albrecht Mayer, Jonathan Kelly, Alexei Ogrintchouk and Prof. Günther Passin. From January until July of 2004 she played with the Baden State Opera, Karlsruhe. During the years 2004 through 2005 she was Principal Oboist of the European Union Youth Orchestra with whom she toured through Scandinavia and the Baltic States under the direction of Paavo Järvi and Yan Pascal Tortelier. She has gone on to work with the Bamberg Symphony orchestra, the Stuttgart Opera and the North-west German Radio Philharmonic and plays regularly as Principal Oboist with the South-west German Chamber Orchestra.

Rebekah Abramski has been the Solo-Contrabassoonist with the Baden State Opera in Karlsruhe since September 2003. Before this she spent two years with the Stuttgart Opera playing both bassoon and contrabassoon. Rebekah began her studies at Chetham's School of Music in Manchester, England, where she was taught by Graham Salvage, principal bassoonist of the Hallé Orchestra. After her A levels she continued her studies from 1996-2000 in Manchester at the Royal Northern College of Music with Edward Warren and subsequently Alan Pendlebury, principal bassoonist with the Royal Liverpool Philharmonic. During this time she won the RNCM bassoon prize and scholarships from the Philharmonia/Martin Musical scholarship fund and the Countess of Munster Trust. Being awarded the King Edward VII British-German Foundation scholarship made possible a further three years of study in Stuttgart at the Hochschule für Musik und Darstellende Kunst with Prof. Marc Engelhardt.

Ron Abramski studied under Ryszard Bakst at the Chethams School of Music in Manchester. During this time at the age of 14 he performed the Chopin Piano Concerto Nr. 1 in e minor with the Chethams Chamber Orchestra and gave a private concert for Witold Lutoslawski of Lutoslawskis Piano Concerto, after which Lutoslawski proclaimed him as a "great Talent". In 1993 during his time at Chethams and later at the Guildhall school of Music in London he studied with Maria Curcio a former student of Artur Schnabel, the following year he was invited to perform in the Musique de Chambre à l'Empéri Festival in Salon de Provence, France. In 1996 he performed as soloist in both the Royal Festival Hall and the Barbican Centre in London playing the "Carneval of the Animals" and in 1998 he was a piano finalist in the BBC Young Musicians competition. In 1999 he performed Messiaen's Oiseaux Exotiques as part of "Visions: The Music of Olivier Messiaen" festival and made his Wigmore Hall recital debut as a winner of the Worshipful Company of Musicians "Maisie Lewis Young Artists Awards". Mr. Abramski has received scholarships from the KPMG/Martin Musical Scholarship Fund and the Hattori Foundation. As the winner of the Yehudi Menuhin/English Speaking Union Scholarship 2000 for the Banff Centre for the Arts, he recently performed in Canada's Banff Arts Festival, and received a standing ovation. Mr. Abramski was selected as a winner of the 2001 UK Making Music Young Concert Artist Awards and performed numerous concerts throughout the UK since. From 2001 to 2003 he studied privately with Cristina Ortiz in London and since April 2005 he is a student of Prof. Dr. h.c. Fany Solter at the University of Music, Karlsruhe, Germany.