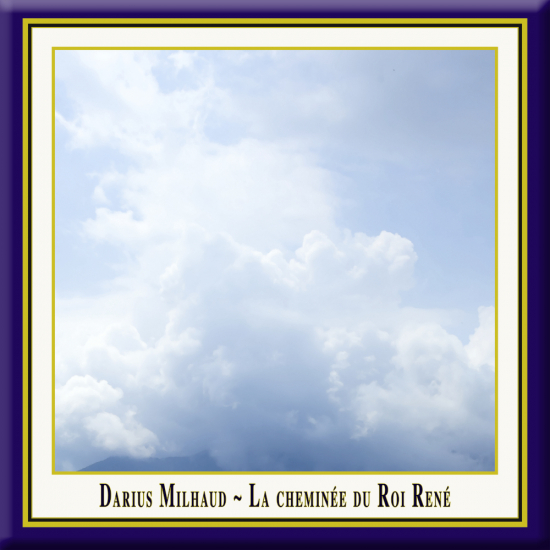 performed by the Berlin Chamber Consort

a cheminée du roi René (The Stroll of King René), Op. 205, is a suite in seven movements for wind quintet, composed in 1939 by the French composer Darius Milhaud. It is written for flute, oboe, clarinet, horn and bassoon.
The suite is an adaptation of the music that the composer wrote for Raymond Bernard's 1939 film Cavalcade d'amour. It was first performed in 1941 at Mills College, California. The screenplay by Jean Anouilh and Jean Aurenche is set in the court of René I in the fifteenth century and includes three love stories with incidental music by the composers Milhaud, Honegger and Désormière.
When Milhaud finished the piece in 1941, he sent the original score as a gift to a composer he always admired: Charles Koechlin, knowing his passion for the Medieval Music. He got an immediate answer saying: "I didn't accept last year the National Order of the Legion of Honor, but I will accept this wonderful present with great pleasure."
The castle and the court of René I, count of Provence, were situated in Aix-en-Provence, birthplace of Darius Milhaud, who was always fascinated by the history of the king, his code of chivalry and the legendary tournaments that took place at his court. Although the composer studied several musical manuscripts of the period, the writing of La cheminée du roi René shows very little evidence of this; the piece bears the characteristic hallmarks of the rest of Milhaud's music.
All the movements are very short, with an alternation between "nonchalant" and very rapid tempi: a collection of medieval miniatures. The shortest movement is less than a minute in length, while the longest is only three minutes long. This gives the impression of a single piece, in just one breath, even more so because the musical atmosphere changes so little between different movements. In all the suite lasts around thirteen minutes.
La maousinglade, a discrete sarabande with the theme taken up by the oboe, is particularly striking. The Joutes sur l'Arc is replete with renaissance ornamentation, while the hunting horn is evoked in the Chasse à Valabre. The final Madrigal, calm, restful and very neoclassical, brings the work to a melancholy close.
"La cheminée du roi René" is one of Darius Milhaud's best known works and is one of the most popular pieces of chamber music in the twentieth-century repertoire for wind quintet. The opening motif of Madrigal nocturne, performed by the BBC Concert Orchestra, is used as the signature melody by Sveriges Radio P2 and BBC Radio 3 in their six-hour Through the Night programme.

From Wikipedia - The Free Encyclopedia

he Berlin Chamber Consort (in German: Kammervereinigung Berlin) was foundet in 1984 by five joung musicians - then still students at the Berlin Musikhochschule - who soon succeeted in developing a joint stylistic concept under the guidance of their mentor Professor Eberhardt Grünenthal. It is not the aggregate of individual achievements that is importend; it is the formation of a homogeneous, unified sound that will truly engender soloist playing.
The ensemble's steadily growing repertoire pays equal attention to standard works of the quintet literature and lesser known or new compositions which charmingly anlarge the expressive potential of chamber music for winds.
The Kammervereinigung gave its competition debut in Colmar (France) in 1988 and althought the youngest quintet taking part, succeedet in winning second price and the spezial jury prize in the international chamber music competition there. In 1989 the quintet was a pricewinner (third prize) at the ARD public broadcasting network's International Music Competition in Munich. This period marked the beginning of an exceptionally fruitful artistic partnership whith Prof. Michael Höltzel (Detmold/Germany), who took the young artists under his wing.
In 1991 the Kammervereinigung Berlin won the German Music Competition in Bonn, making it the first ensemble from the new east German Länder to be award this prize. This was a succes that received elegant confirmation in the autumn of 1993 when the Kammervereinigung again won a ARD competition prize.
Apart from performing together as a quintet, whith guest appearances all over Europe, the young musicians play (some of them in solo positions) with various German orchestras: the Norddeutsche Philharmonie Rostock, the Orchestra of Komische Oper Berlin, the Staatskapelle Berlin and the orchestra of the Bayreuther Festspiele.

This release is featured in the playlist 'Classical Dinner Party', compilated by Amazon's music experts.